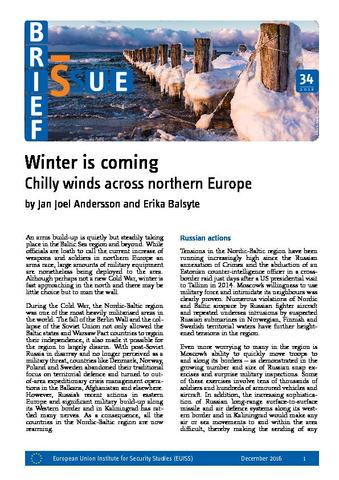 An arms build-up is quietly but steadily taking place in the Baltic Sea region and beyond. While officials are loath to call the current increase of weapons and soldiers in northern Europe an arms race, large amounts of military equipment are nonetheless being deployed to the area. Although perhaps not a new Cold War, winter is fast approaching in the north and there may be little choice but to man the wall. During the Cold War, the Nordic-Baltic region was one of the most heavily militarised areas in the world.

The fall of the Berlin Wall and the collapse of the Soviet Union not only allowed the Baltic states and Warsaw Pact countries to regain their independence, it also made it possible for the region to largely disarm. However, Russia’s recent actions in eastern Europe and significant military build-up along its Western border and in Kaliningrad has rattled many nerves.