Upgrading the Union’s response to disasters 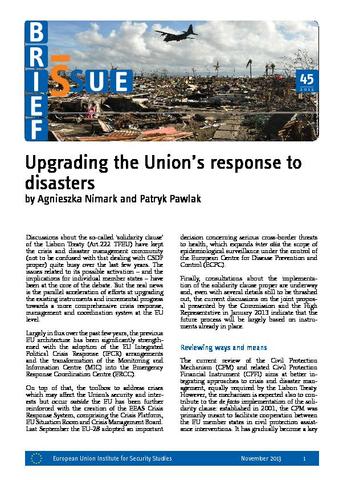 Discussions about the so-called ‘solidarity clause’ of the Lisbon Treaty (Art.222 TFEU) have kept the crisis and disaster management community (not to be confused with that dealing with CSDP proper) quite busy over the last few years. The issues related to its possible activation – and the implications for individual member states – have been at the core of the debate. But the real news is the parallel acceleration of efforts at upgrading the existing instruments and incremental progress towards a more comprehensive crisis response, management and coordination system at the EU level. Largely in flux over the past few years, the previous EU architecture has been significantly strengthened with the adoption of the EU Integrated Political Crisis Response (IPCR) arrangements and the transformation of the Monitoring and Information Centre (MIC) into the Emergency Response Coordination Centre (ERCC). On top of that, the toolbox to address crises which may affect the Union’s security and interests but occur outside the EU has been further reinforced with the creation of the EEAS Crisis Response System, comprising the Crisis Platform, EU Situation Room and Crisis Management Board. Last September the EU-28 adopted an important decision concerning serious cross-border threats to health, which expands inter alia the scope of epidemiological surveillance under the control of the European Centre for Disease Prevention and Control (ECPC). Finally, consultations about the implementation of the solidarity clause proper are underway and, even with several details still to be thrashed out, the current discussions on the joint proposal presented by the Commission and the High Representative in January 2013 indicate that the future process will be largely based on instruments already in place.