13 March 2018
Edited by
With contributions from 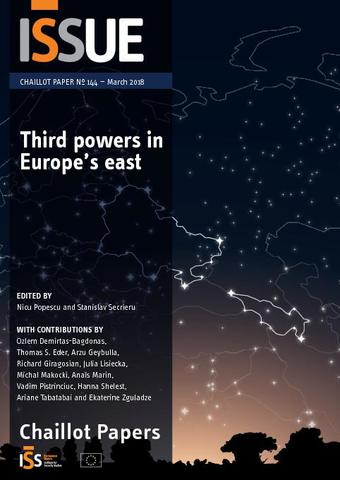 Relations between most of the Eastern Partnership (EaP) countries and third powers have been visibly intensifying in recent years. China, Turkey, Iran and the Arab states are all a bigger presence in the region than was the case a decade ago. This trend is driven by, on the one hand, the growing economic and foreign policy ambitions of the third powers, and on the other by the EaP countries’ eagerness to expand their economic and diplomatic links with powers other than the EU, US or Russia. Through a strategy of increased engagement with the third powers, these countries are seeking to diversify their trade and foreign policy options, in the process even further diluting what was once primarily a Russian sphere of influence.

This Chaillot Paper examines the geopolitical repercussions of the rising presence of third powers in the region, and how the growing constellation of partnerships between the EaP countries and these powers serves a range of strategic purposes for the actors involved.