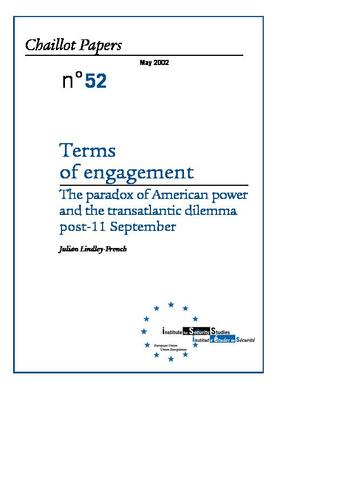 The world has never known a power such as the United States. Consequently, Europe cannot expect the United States to be anything other than unilateralist. America is simply too powerful. What matters, therefore, is the nature of American unilateralism: broad unilateralism, open to the counsel of allies and capable of adjustment in the light of events; or narrow unilateralism, closed and dismissive of others, reflecting an America that prefers to use its power to export domestic policy rather than construct effective and engaged foreign and security policy. Unfortunately, the more powerful the United States becomes the more vulnerable it perceives itself to be. Consequently, 11 September has reinforced the trend towards narrow unilateralism and a narrow concept of engagement that is not only undermining transatlantic security relations but reinforcing a myth of American military exceptionalism the application of which is often as narrow as the policy that controls it. This often leaves the armed forces of America’s European allies having to undertake essential military tasks that are the ‘stuff ’ of modern security, such as extended special forces operations and peacekeeping and peacemaking, which Americans regard as beneath their war-fighting colossus. Contrasting American and European perceptions of power and vulnerability are reinforcing division in the transatlantic security relationship. Consequently, shared interests and values are no longer sufficient to ensure an effective and balanced security relationship, because the partners have increasingly different security concepts in which Americans tend to over-militarise security, whereas Europeans over-civilianise it. Therefore, a new organising principle is needed to reflect a new transatlantic security reality in a new security environment in which flexibility and autonomy will be essential if American and European strengths are to be utilised to effect.

The United States: the empire of force or the force of empire?