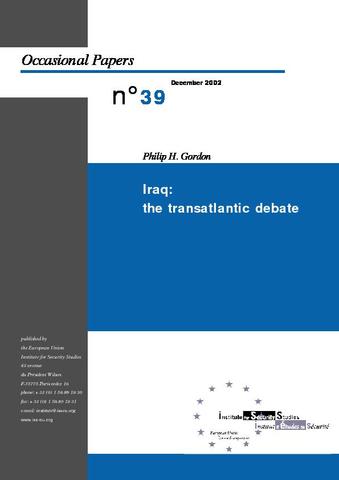 Most Americans see the regime of Saddam Hussein as a major threat to regional and international security that must be thwarted, even if that means threatening or even using military force. If Saddam were to acquire nuclear weapons, they fear, he would seek to use them to dominate the Middle East, possibly invading his neighbours as he has in the past and perhaps deterring the United States from stopping him. His nuclear, biological or chemical weapons, moreover, might end up in the hands of Islamic terrorists who would show no compunction about using them against the United States, or Saddam himself might do so out of a thirst for vengeance. Whereas failure to act in Iraq would make a mockery of the United Nations Security Council and international law, a decisive action to topple Saddam would liberate the Iraqi people, allow the United States to lift sanctions on Iraq and withdraw its forces from Saudi Arabia, and perhaps make progress toward a freer and more democratic Middle East.
Europeans do not deny that the Iraqi regime is a threat, but they question whether that threat is so pressing that the international community should run the risk of invading an Arab country in the heart of the Middle East. They fear that a war in Iraq could be extremely bloody — both for the invading forces and Iraqi civilians — especially if it led to urban combat or Iraq’s use of weapons of mass destruction. Even if the initial invasion went well militarily, they doubt that the international community would be able to impose stability and democracy in place of Saddam and worry instead about internal conflicts over resources and power, possibly leading to civil war. Europeans also fear that an attack on Iraq would distract from and possibly undermine the war on terrorism, and that it would set a dangerous precedent for the unilateral use of preventive force.
It will not be easy to overcome these differences in perspective — which result from a range of deeply rooted historical, cultural, strategic and domestic political factors. But it should not be impossible either. The United States has an interest in reaching agreement with Europe on Iraq because of the legitimacy and potential political and financial benefits that European support would bring. Europeans have an interest in agreement, because a US decision to invade Iraq unilaterally would undermine the UN Security Council, severely damage transatlantic relations, expose the weakness of Europe’s common foreign policy and exclude European countries from influence in Iraq afterwards. By going to the United Nations on 12 September 2002 to demand fulfilment of UN Security Council resolutions, President Bush implicitly recognised the importance the United States attaches to winning allied support. And while Europeans may be sceptical that Bush will ever agree to anything short of regime change, they should know that their own policy decisions will strongly influence the debate in Washington: the more they can convince Americans that they are serious about demanding an end to Iraq’s weapons of mass destruction programmes, the more likely the United States will be to accept an outcome short of war.
This paper proposes a common US-European strategy: joining together to demand, under the threat of an invasion that would change the Baghdad regime, Iraq’s full compliance with UN Security Council resolutions calling for an end to its weapons of mass destruction programmes. If Iraq failed to comply with a new UNSC resolution reiterating these demands and setting forth a new verification regime, the United States and Europe would together overthrow Saddam Hussein and undertake a major reconstruction and peacekeeping effort in Iraq. If, on the other hand, Saddam did give up his weapons of mass destruction under the credible threat of military force, the United States would forgo plans for invading Iraq so long as Baghdad complied with existing and new UNSC resolutions. Neither Americans who are determined to change the Iraqi regime nor Europeans resolutely opposed to war will be entirely satisfied with such an approach — the former because it might mean deferring regime change and the latter because it implies a readiness to go to war. But it is a far better course than either of the main alternatives: a potentially very costly US invasion of Iraq (even more costly if the United States has to bear responsibility for it alone) or having to live with a nuclear-armed Saddam Hussein.