The United States: the empire of force or the force of empire? 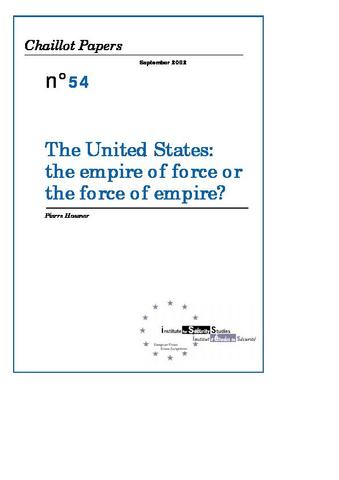 Has America's attitude towards the use of force changed since 11 September 2001? Is the country being drawn away from the temptations of withdrawal or isolationism towards imperialism, and, moreover, from a liberal imperialism based on economic dynamism to a robust form founded on military power? Is the combined feeling of vulnerability, of being incomprehensibly and unjustly attacked yet at the same time invincible, producing a 'post-11 September syndrome' that is taking the place of the 'post-Vietnam syndrome' yet, like it, may possibly be no more than a phase in an evolution in America that could very well be cyclical? In an attempt to throw some light on these questions, if not to answer them, this Chaillot Paper has endeavoured to take a historical and sociological approach. It begins by retracing the course of American foreign policy and its contradictions, trying to go beyond the classical contrasting of idealism and realism, and of isolationism and internationalism, to consider rather the concepts of exceptionalism and unilateralism. It analyses the contradictions between American military tradition and the efforts by civilian strategists to take advantage of the possibilities offered by technology in order to influence the conduct of military operations in the direction of limitation, flexibility and control. To give an understanding of present-day American attitudes, it analyses in turn the role played by public opinion as it is perceived through the media and opinion polls, and that played by the military and the political élites of successive governments.