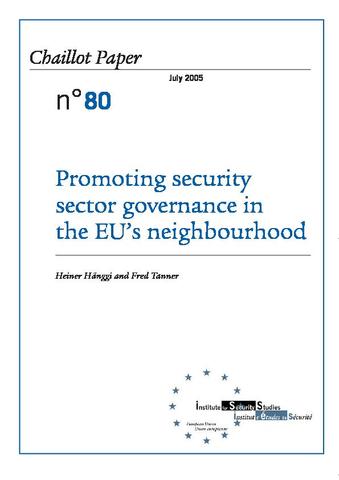 With the European Union’s 2004 round of enlargement, its neighbourhood now stretches from the Balkans to the Southern Caucasus, and from Russia to the Southern Mediterranean. This new neighbourhood suffers from serious deficits in terms of security, development and democracy, which constitute a serious challenge for the EU’s own security. It is clear, however, that no genuine political and economic modernisation can be carried out as long as defence and security sectors remain unaccountable to civilian authorities, lack transparency and waste valuable national resources. This Chaillot Paper examines to what extent the EU is able to address the question of security sector reform and governance with its neighbours. Although increasingly engaged in the promotion of security sector governance, the EU has neither developed a comprehensive policy framework, nor mainstreamed its manifold activities aimed at promoting security sector governance. Moreover, it pursues the reform of security institutions such as police forces, border guards or judicial systems on a piecemeal basis, shying away from involving itself in defence-related aspects of security sector governance, even though ESDP operations are increasingly dealing with post-conflict situations that require the reform and reintegration of military forces.