Security by proxy? The EU and (sub-)regional organisations: the case of ECOWAS 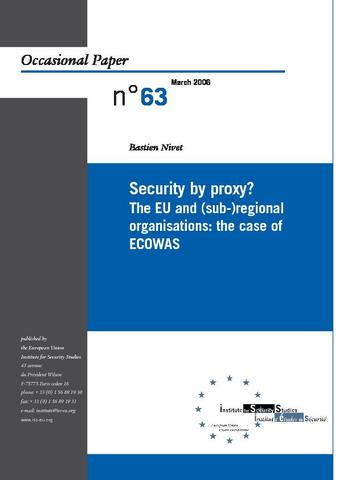 The European Union (EU) has for a long time paid attention to processes of regional integration and cooperation on other continents. However, the relations the EU has developed with other regional or sub-regional organisations until a very recent period were essentially focused on economic, development and trade issues, partly because of the late emergence of the EU itself as a foreign and security actor.
Today, many of the security challenges and strategic ambitions expressed in the European Security Strategy may plead the case for reinforced partnerships between the EU and (sub-)regional organisations. This is the case with issues such as state failure and organised crime, regional conflicts, conflict prevention and stabilisation, etc. This paper aims to explore both the promises and challenges raised by the possibility for the EU to project stability and security through partnerships with <br />(sub-)regional organisations. For this purpose, the Economic Community of Western African States (ECOWAS) and its relations with the EU has been chosen as a test case.
Indeed, the former organisation has already emerged as a security actor to a certain extent, not least in the field of crisis management, with the interventions of the ECOWAS Monitoring Group (ECOMOG) in several conflicts since the early 1990s. Besides, the past few years have seen a broadening and deepening of EU-ECOWAS relations, which now touch on security matters.
While the West African organisation, along with other actors such as the United Nations (UN) and the African Union (AU), is now highly recognised as a key actor in the region, the analysis of its relations with the EU in the field of security also reveals challenges for a fruitful inter-regional strategic partnership.
In a region where the local context implies that the agenda for security cooperation between the EU and the regional organisation is potentially endless, setting a clear agenda and priorities for such a cooperation seems first of all essential although difficult.
Secondly, the right balance between principles such as the respect of local demands, ownerships and initiatives on the one hand, and the realities of European methods, means and ambitions on the other hand, is also sometimes difficult to find.
The development of strong inter-regional partnerships in the field of security also raises important issues of coherence and efficiency, both at the European and West African levels. On the European side, the enlargement of traditional development and cooperation mechanisms towards security issues and the difficulties of Europeanising member states' African policies raises difficulties. As for ECOWAS, the Europeans should be aware that it is occasionally not trusted by its own member states, and that gaps exist between decisions and discourses produced at the regional level, and policies conducted at the national level. While relying on (sub-)regional organisations in order to contribute to security and stability on other continents can be a very valuable approach, the EU should therefore pay attention to the impact of these organisations on their own member states, and to issues of coherence at European, inter-regional and multilateral level (including organisations such as the UN and the AU).

Monitoring a region in crisis: the European Union in West Africa