Monitoring a region in crisis: the European Union in West Africa 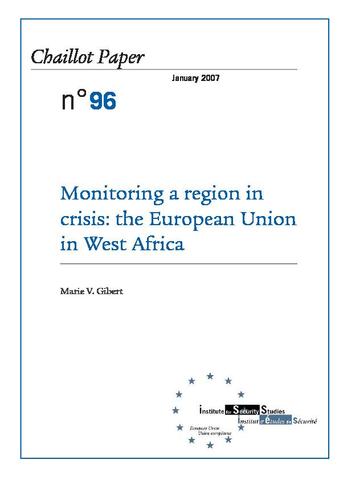 Liberia, Sierra Leone, Guinea-Bissau, Guinea, Côte d'Ivoire … For many, these names conjure up political crises and violent conflicts. The five West African countries that constitute the Mano River Basin have attracted significant international and regional attention and preoccupation over the last fifteen years. Due to its history of colonial involvement in Africa, Europe shares a common past with these countries and has maintained a close partnership with them ever since their independence. Over the years, a series of agreements has established trade and development aid partnership links between the European Union and the Africa-Caribbean-Pacific (ACP) group of states. An increasing emphasis on political stability and on security was progressively introduced into the two last Lomé agreements and their successor, the Cotonou Agreement (2000). This peace and security dimension is also fully acknowledged in the EU's strategic partnership for Africa, which sets out the steps the EU will take by 2015 to support African efforts to build a peaceful future. The Mano River conflicts justified and gave a new urgency to these new efforts and the region remains the focus of considerable European political analysis and attention. This Chaillot Paper focuses on the recent trend in the EU towards a holistic understanding of development in Africa, whereby security, political stability and democracy are now considered essential elements in the recipe for economic development. A range of specific EU instruments for dealing with Africa has gradually emerged in this context. Against this background, the paper suggests some approaches for the improvement of the EU's current responses to West Africa's fragile economic and political stability.