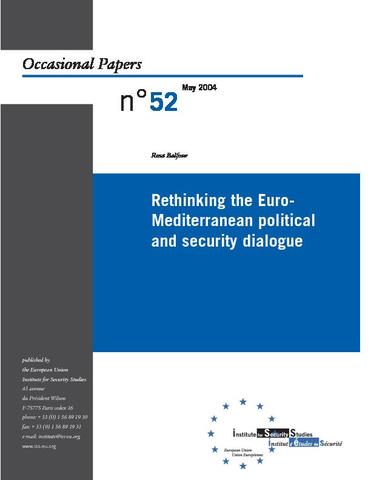 Since the summer 2000, the emergence of the new intifada and the deterioration of Arab- Israeli relations, the terrorist attacks of 11 September and the military intervention in Iraq have all played their part in undermining the security environment in and around the Mediterranean, with negative repercussions on EU policies towards the region, while at the same time highlighting the vital importance of the Euro-Mediterranean Partnership (EMP). The 2003 Wider Europe/New Neighbourhood initiative and the European Security Strategy that confirmed the EU’s ambition to become a fully fledged regional power and to strengthen its global role could together give fresh momentum to the EU’s Mediterranean policies.
But was the EMP on its deathbed? Should these new strategies signal a change of direction in the EU’s Mediterranean policies? This paper argues that, while welcoming the new proposals, the Barcelona process still remains an appropriate framework for deepening relations between the two shores of the Mediterranean. Its strengths lie in its ‘global approach’ that binds together economic reform with development, cultural exchange with political dialogue, human rights with security, and in the conceptualisation of ‘comprehensive’ security that underpins the EMP. It also provides the only forum in which Israel and the Arab countries can sit around the same table.
The core focus of this paper is the first basket of the Barcelona process, which deals with a ‘political and security partnership’ - perhaps one of the most neglected aspects of the EMP given its uneven and limited record of success, where the ambitions of 1995 were gradually wounded as tension in the Middle East became increasingly explosive. More specifically, the security predicament in the region must be understood in conjunction with the absence of a process of democratisation, which, de facto, has hitherto been tacitly supported by the EU member states for fear of the rise of Islamic fundamentalism. But the endurance of more or less authoritarian regimes has created a vicious circle whereby the democratic deficit breeds fundamentalism and fundamentalism provides the justification for authoritarianism.
Only recently has the European Commission started to acknowledge the degree to which the creation of a secure environment also depends on the individual human dimension, and the new European Security Strategy, too, posits a strong relationship between security and good governance, human rights and the rule of law. This paper explores the relationship between these two dimensions, traces the developments in these fields from 1995 until the most recent achievements during the Italian EU Presidency of the second half of 2003 and suggests some policy recommendations.
Rather than seek radical change to revamp the EU’s Mediterranean policies, a modus vivendi between the achievements of the EMP’s ‘global approach’ with the new concepts of ‘differentiation’ and ‘benchmarking’ introduced by the Wider Europe strategy should be found, allowing individual countries to make progress without jeopardising the entire regional approach. The EU should also try to strike a balance between the conception of ‘soft’ security inherent to the EMP and addressed following a comprehensive methodology, and the new developments in the fields of the European Security and Defence Policy and the new European Security Strategy.