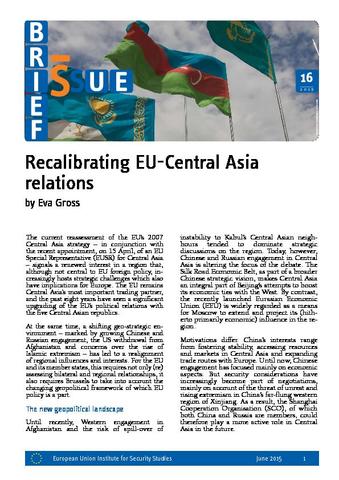 The current reassessment of the EU’s 2007 Central Asia strategy – in conjunction with the recent appointment, on 15 April, of an EU Special Representative (EUSR) for Central Asia – signals a renewed interest in a region that, although not central to EU foreign policy, increasingly hosts strategic challenges which also have implications for Europe. The EU remains Central Asia’s most important trading partner, and the past eight years have seen a significant upgrading of the EU’s political relations with the five Central Asian republics. At the same time, a shifting geo-strategic environment – marked by growing Chinese and Russian engagement, the US withdrawal from Afghanistan and concerns over the rise of Islamic extremism – has led to a realignment of regional influences and interests. For the EU and its member states, this requires not only (re)assessing bilateral and regional relationships, it also requires Brussels to take into account the changing geopolitical framework of which EU policy is a part.