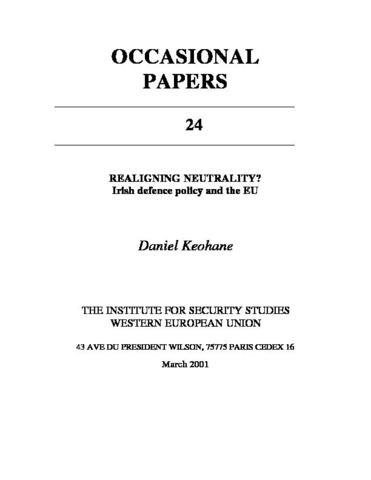 Daniel Keohane explores the changing context of Irish defence policy in light of the rapid development of the Common European Security and Defence Policy (CESDP). In so doing he touches on policy considerations germane to all EU member-states with a tradition of neutrality who are having to adjust to a new role in a changing world. Keohane also uses defence policy as a metaphor for the changing internal debate at a time when a strong and polemical discourse is underway about Ireland’s role in the wider world. Many, particularly on the Left, hark back to the days when Ireland’s traditional neutrality was a feasible option in a world made up of competing blocks. Keohane argues that in such a changed strategic environment neutrality no longer affords the luxury of non-engagement and that Ireland has to be seen to be an active and effective member of a broad Western security community. At the same time, he points out that Ireland not only has a strong record of UN peacekeeping world-wide but that its commitment of up to 850 troops to the European Rapid Reaction Force represents tangible evidence of how far Ireland has come in realigning its neutrality. However, in a tight budgetary environment, without any major external threats and with the situation in Northern Ireland reasonably stable the Irish Defence Force will have to compete with other demands upon the national treasury if it is to improve its capabilities so that its stated will can be matched by relevant and effective military forces. Keohane concludes that whilst Ireland is no longer a neutral state it remains non-aligned, with NATO membership out of the question for the foreseeable future. That said, the CESDP will continue to condition Irish defence policy and promote a pro-active role for Ireland in promoting European peace and security.