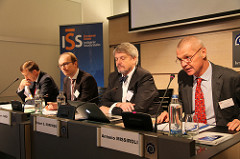 Held a week before the EU-UN Steering Committee in New York, the European Union Institute for Security Studies (EUISS) and the Center for International Peace Operations (ZIF) organised a seminar in Brussels on 13 November entitled Partnering in peace operations: current developments and lessons learned in EU-UN cooperation. The event brought together senior practitioners and planners from the headquarters of both UN and EU field missions, as well as independent experts to discuss the challenges of cooperating in peace operations. The first panel, chaired by EUISS Senior Analyst Thierry Tardy, examined cooperation in the field, with General Gilles Janvier, Chief of Staff of the CPCC, and Robert Sorenson, Deputy Special Representative of the UN Secretary-General for Kosovo, as speakers. The second panel, chaired by Tobias Pietz (ZIF), addressed issues such as the implementation of the EU Action Plan on CSDP support to UN peacekeeping. Helena Boguslawska, Deputy Head of the CSDP Policy, Partnerships and Agreements Division at CMPD, Rory Keane, Head of the UN Liaison Office for Peace and Security in Brussels, and Joachim Koops, from the Vesalius College (VUB), also made presentations at the event. Drawing on publications on EU-UN relations released by both the EUISS and ZIF in preparation for the meeting, the event made the most of the expertise available to both partners. The importance of the event was further highlighted by the fact that the issue of EU-UN Partnerships is, in all likelihood, set to feature high on the agenda of the upcoming European Council in December. In the meantime, the EUISS plans to closely monitor and support developments in this area, especially given that the time frame of the EU Action Plan is due to expire by December 2014.