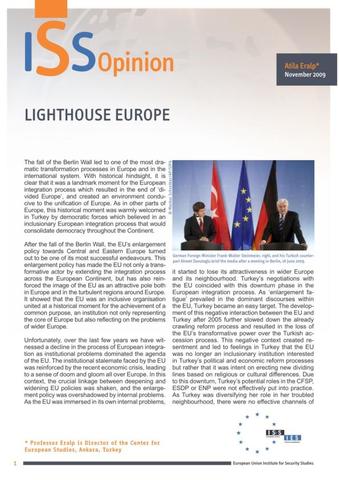 The fall of the Berlin Wall led to one of the most dramatic transformation processes in Europe and in the international system. With historical hindsight, it is clear that it was a landmark moment for the European integration process which resulted in the end of ‘divided Europe’, and created an environment conducive to the unification of Europe. As in other parts of Europe, this historical moment was warmly welcomed in Turkey by democratic forces which believed in an inclusionary European integration process that would consolidate democracy throughout the Continent.

After the fall of the Berlin Wall, the EU’s enlargement policy towards Central and Eastern Europe turned out to be one of its most successful endeavours. This enlargement policy has made the EU not only a transformative actor by extending the integration process across the European Continent, but has also reinforced the image of the EU as an attractive pole both in Europe and in the turbulent regions around Europe. It showed that the EU was an inclusive organisation united at a historical moment for the achievement of a common purpose, an institution not only representing the core of Europe but also reflecting on the problems of wider Europe.