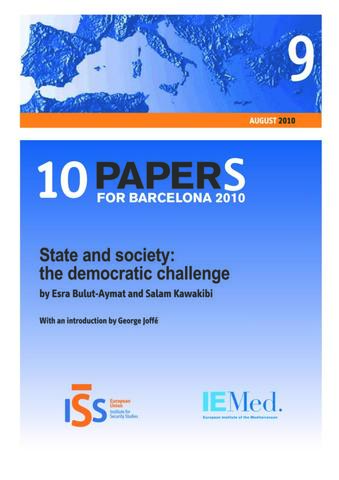 This is the ninth in a series of ten papers published jointly by the EU Institute for Security Studies (EUISS) and the European Institute of the Mediterranean (IEMed) which aim to address ten critical topics for Euro-Mediterranean relations. The papers have been commissioned with a view to formulating policy options on a set of issues which are central to achieving the objectives set out in the 1995 Barcelona Declaration and the Paris Declaration of 2008, as well as defining new targets for 2020 in the political, economic and social spheres.

This ninth paper deals the two distinct but interlinked topics: one chapter focuses on the question of political identity at the national level and its implications for regional integration, while the other addresses the issue of how civil societies can be constructed within states where, as a precondition, the rule of law must be valued and upheld. Both authors argue that policy-thinking on Euro-Mediterranean relations needs to pay more attention to the domestic sphere as the key arena in which both identity and democracy evolve.

A deeper Free Trade Area and its potential economic impact