Less is more? The US at the UN 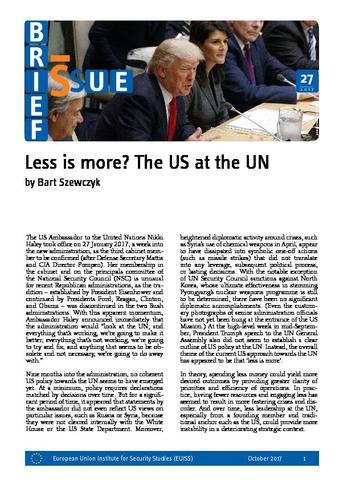 The US Ambassador to the United Nations Nikki Haley took office on 27 January 2017, a week into the new administration, as the third cabinet member to be confirmed (after Defense Secretary Mattis and CIA Director Pompeo). Her membership in the cabinet and on the principals committee of the National Security Council (NSC) is unusual for recent Republican administrations, as the tradition – established by President Eisenhower and continued by Presidents Ford, Reagan, Clinton, and Obama – was discontinued in the two Bush administrations. With this apparent momentum, Ambassador Haley announced immediately that the administration would “look at the UN, and everything that’s working, we’re going to make it better; everything that’s not working, we’re going to try and fix; and anything that seems to be obsolete and not necessary, we’re going to do away with.”

Nine months into the administration, no coherent US policy towards the UN seems to have emerged yet. At a minimum, policy requires declarations matched by decisions over time. But for a significant period of time, it appeared that statements by the ambassador did not even reflect US views on particular issues, such as Russia or Syria, because they were not cleared internally with the White House or the US State Department.

Cuba and Trump: the power of symbols