Leading alone or acting together? The transatlantic security agenda for the next US presidency 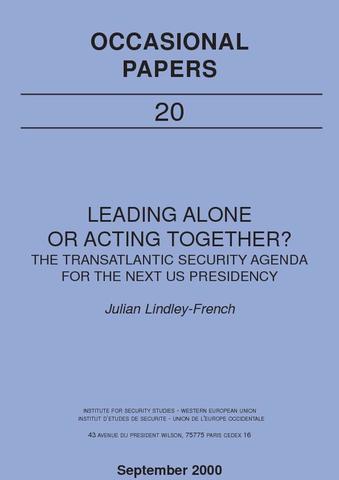 This contribution to the <i>Occasional Papers</i> series of the WEU Institute for Security studies emerged from a report undertaken into the state of the transatlantic security relationship and the respective positions of the two candidates on key US-European issues in the run-up to the general election in November. As part of the research the author undertook a series of interviews with senior figures from the White House, Congress and the Departments of State and Defense, as well as academics specialising in the field.&nbsp; Where possible, assertions made by those interviewed have been identified but many of those interviewed did so on the basis that their comments were not for public consumption and it is the duty of this author to respect that stricture. The views expressed herein reflect the personal analysis of the author given the material available, and in no way constitute an official position of the Western European Union.