The implications of the Yugoslav crisis for Western Europe's foreign relations 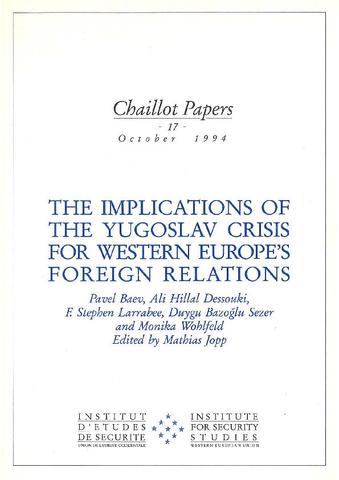 The Yugoslav crisis, for which the West Europeans have been attempting to find a solution since its outbreak, has become the bloodiest conflict in Europe since the Second World War, a drama for the peoples concerned and a threat to the stability and security of all of the Balkans. But its implications go far beyond sub-regional effects. Posing for over three years now a challenge to the crisis-management ability of the international community, it has influenced the restructuring of post-Cold War security relations and has complicated Western Europe's development of a Common Foreign and Security Policy (CFSP) and search for a new role in international affairs. In this paper, scholars from the United States, Russia, Central Europe, Turkey and Egypt analyse their countries' perceptions of Western Europe's handling of the crisis and the actual or potential consequences for relations with the European Union (EU) and Western European Union (WEU). The following is a synopsis of the main points brought out in these case studies, evaluated and complemented by an analysis of West European views and perceptions.