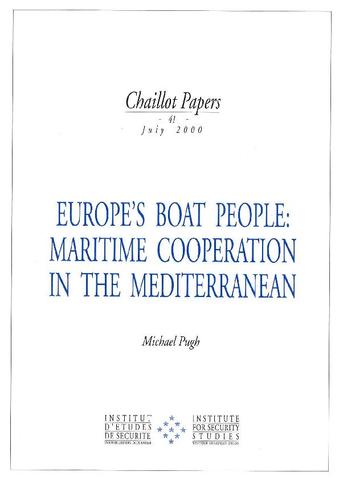 Immigration is certainly not a risk in itself: European countries need the contribution made by immigrant workers, and it is desirable that Europe’s doors remain open in a concerted, controlled way. On the other hand, illegal immigration presents a double risk to the stability of European countries and the security of the clandestine immigrants, who often undertake this adventure at the risk of their lives. This Chaillot Paper looks at the question of ‘boat people’ in Europe, a recurring phenomenon in Europe for the last few years in the Mediterranean in particular, off the coasts of France, Italy and Spain. In addition to a lack of legal and political rulings on the status of these clandestine seafarers, there are often human tragedies that the European democracies are powerless to prevent. Michael Pugh, Reader in International Relations at the University of Plymouth and an Institute senior visiting fellow in 1999, is without doubt one of the specialists best qualified to analyse this phenomenon of boat people, a problem that is dealt with in the western Mediterranean by the navies of the countries concerned. These of course have a long tradition of giving help at sea and assistance to the civil authorities, and are linked by many bilateral and multinational cooperative agreements. However, the rise in the number of refugees at sea that can be expected, in the context of the development of the European Union’s common security policy, calls for a strengthening of cooperation among European navies on the one hand and with those of countries to the south of the Mediterranean on the other.