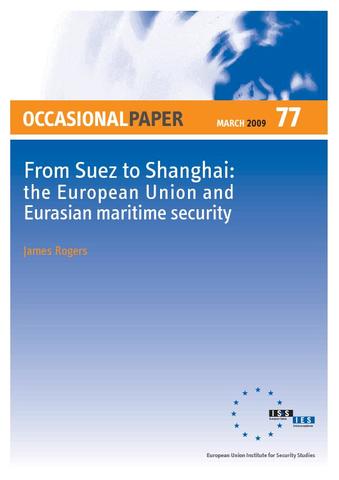 This paper provides an initial foray into the emerging geopolitical situation in the Eurasian coastal zone, and concentrates on the geostrategic activities of China, India, Japan, Russia, South Korea and the United States. This comes at a time when geopolitics has been largely neglected at the European level: the geographic dimension of European foreign and security policy has remained heavily entwined with the security and prosperity of the European Neighbourhood – and parts of Africa. While the European Neighbourhood, particularly, should not be neglected, Europeans will have to develop and pursue a far more assertive and integrated grand strategy in the years ahead. This paper has therefore identified the coastal zone stretching from the Suez Canal to the city of Shanghai – and, perhaps, as far as Seoul – as the most likely region to ex¬perience great power competition and general disorder over the coming decades. What is more, this coastal zone is of critical importance to the European Union, not least because it is Europeans’ most important ship¬ping route for manufactured goods and energy supplies. The paper begins by examining the established and nascent maritime geostrategies of the Eurasian great powers, and the potential consequences the new geopolitics might have for the European Union. It then looks at European interests in the Suez to Shanghai zone, and focuses on the role of geography in the region. It also emphasises the likely challenges emanating from Chinese, Indian, Russian and American maritime competition. The final section argues that as the relative balance of power between Europeans and other Eurasian powers shifts over the coming decades, the European Union should provide a strong vehicle for the realisation of common European objectives, ranging from the maintenance of the peace to building up European naval, logistical and geopolitical capabilities.

The evolution of the EU-China relationship: from constructive engagement to strategic partnership