The 2006 EUISS Transatlantic Conference (Washington DC, 20th November 2006) was held less than two weeks after the Congressional elections, allowing the participants to reflect on the impact of this political change on Washington scene. The event's overarching theme was the condition and effectiveness of co-operation between the US and the EU at a time of domestic change in the United States following these mid-term elections. Organised in co-operation with the Centre for Transatlantic Relations (JHU/SAIS), conference speakers included such personalities as Congressman Van Hollen, Helga Schmid of the EU Council, senior figures from the State Department, the National Security Council and various figures from think-tanks and the media, providing an animated debate for the wider audience of invited experts. 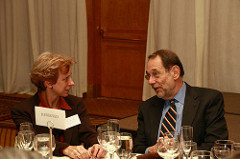