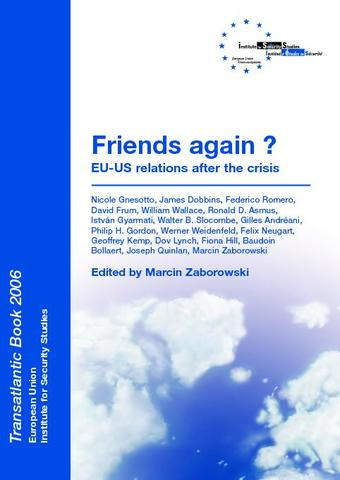 Three years after the crisis ignited by America’s decision to go to war in Iraq, can the United States and the European Union be said to be ‘friends again’? After a rocky and on occasion openly acrimonious period in EU-US relations during George W. Bush’s first presidency,it seems that transatlantic relations have returned to a more harmonious state. A broad convergence of perspectives has emerged which has led to instances of practical co-operation, for example towards Iran, Syria and Afghanistan. Even Iraq has ceased to divide the allies in the way it used to, although on both sides of the Atlantic fundamental views on the war have not changed.
Still, many questions remain regarding the depth, scope and solidity of this new US-EU partnership. This volume brings together a unique collection of contributions written by experts from both sides of the Atlantic and from different shades of the political spectrum. The authors explore the issue from various angles, including the alleged rise of anti-Americanism in Europe, America’s involvement in the Middle East, EU and US relations with Russia, and the importance of transatlantic economic bonds. The final section of the book assesses the extent to which EU-US relations have recovered since the crisis of 2003, and considers the prospects for the future of the transatlantic relationship.