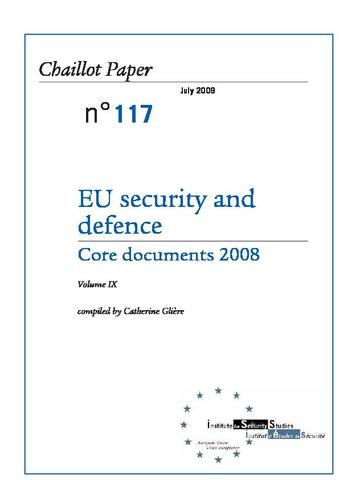 The various political crises that occurred in 2008, and the gradual shift of the world towards a new multipolar order, vividly demonstrated the vital role that the EU can and should play on the international stage today. This holds true whether in the context of the global financial crisis and its implications for the conduct of foreign policy, regional crises or with regard to partnerships with the other global players. As underlined by the High Representative for CFSP, Javier Solana, and by the European Commission in the Report on the European Security Strategy, the EU now carries ‘greater responsibilities than at any time in its history’ in the face of ‘increasingly complex threats and challenges.’ In Georgia, Somalia, Darfur, Kosovo, Guinea-Bissau, as well as in many other places in the world, the European Union strives to contribute to the defence and protection of vulnerable civilian populations and to promote security. This Chaillot Paper, the IXth volume in the EUISS annual series of Core documents on European security and defence, is a compilation of all the main decisions and initiatives undertaken by the EU in 2008 in the framework of the European Security and Defence Policy (ESDP).