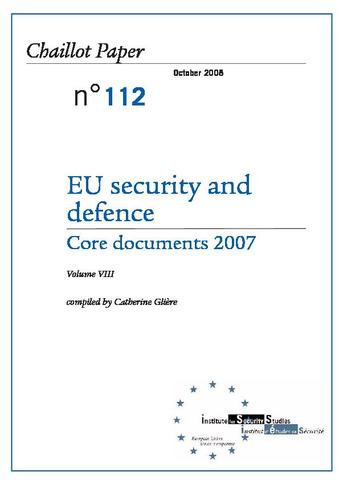 Continuing a well-established tradition which has found sustained favour with our readers, this is the eighth volume of the annual EUISS collection of Core documents on European security and defence. This compendium reflects the evolution of EU policy making in the realm of Common Foreign and Security Policy (CFSP) and European Security and Defence Policy (ESDP) in 2007. The year 2007 was dominated on every front, foreign and security affairs being no exception, by the agreement on the Reform Treaty secured in Berlin in June, and then the laborious drafting period that followed and led to its signing by the leaders of the EU Member States in Lisbon on 13 December. The institutional reforms contemplated in the Lisbon Treaty crucially impact on CFSP/ESDP, as they demand greater coherence between the various components of EU external action, with a view to forging a holistic and hence more effective external action/foreign policy. The mechanisms and instruments providing for the stronger kind of EU involvement we have more recently witnessed in seek-ing to meet political and security challenges, whether they arise in the EU’s own neighbourhood or in more geographically distant regions, are now established. This is an urgent necessity, especially when we consider the evolution of ESDP throughout 2007 and well into the current year, or even the commitments of many EU Member States in military operations, be it in the context of the peacekeeping mission in Lebanon or the war in Afghanistan.