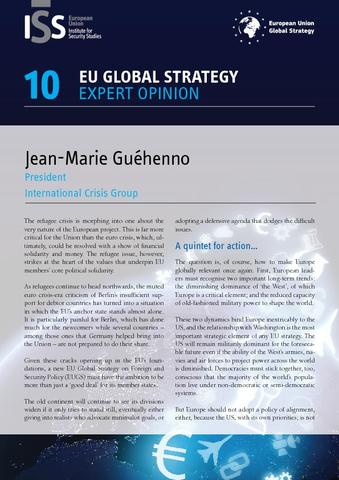 The refugee crisis is morphing into one about the very nature of the European project. This is far more critical for the Union than the euro crisis, which, ultimately, could be resolved with a show of financial solidarity and money. The refugee issue, however, strikes at the heart of the values that underpin EU members’ core political solidarity.

Given the cracks opening up in the EU’s foundations, a new EU Global Strategy on Foreign and Security Policy (EUGS) must have the ambition to be more than just a ‘good deal’ for its member states. The old continent will continue to see its divisions widen if it only tries to stand still, eventually either giving into realists who advocate minimalist goals, or adopting a defensive agenda that dodges the ­difficult issues.

African geopolitics in transformation: what future for peacebuilding? EUISS-led session at the 2020 Stockholm Forum on Peace and Development
Conferences
Africa