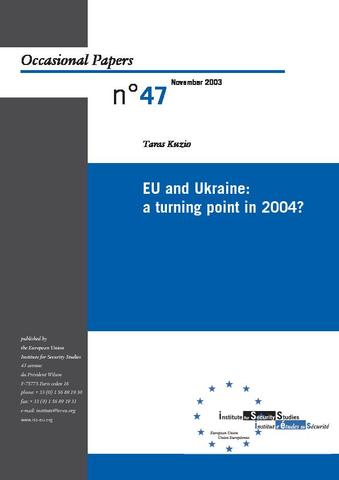 EU enlargement raises important questions: How much further can the EU enlarge? Should the EU encompass geographic ‘Europe’ or stop at the western border of the CIS? Article 49 of the Treaty on European Union (TEU) clearly allows any geographically based European state to apply for membership. Is Ukraine then eligible? On 15 March 2001, the European Parliament supported Ukraine’s future membership; in contrast, the EU continues to fudge any answer to this question. The difficulty in answering these questions lies with the criteria that should be used to formulate a response. Whatever the answer, with enlargement it has become a matter of urgency for the EU to engage strategically with its new neighbours in Eastern Europe. In particular, the EU must develop a realistic strategy for Ukraine, its largest new neighbour within Europe. Of these neighbours only two – Ukraine and Moldova – seek EU membership. One reason why Ukraine needs greater attention on the part of the EU is geopolitical. European Commission President Romano Prodi and Swedish Prime Minister Goran Persson wrote: ‘Any political instability, regressive economic development or fragmentary reform in these countries would threaten to create a new discontinuity in Europe – a political, economic and social divide – in the wake of EU enlargement.’ Ukraine borders three, and soon to be four, new EU members. All four of these are or will soon be NATO members. With enlargement, Ukraine’s geostrategic importance becomes an issue that the EU must address. This Occasional Paper discusses critical issues in the EU-Ukrainian relationship and provides a number of policy recommendations that could contribute towards fashioning an EU strategy towards Ukraine. At the heart of the current stalemate in relations are virtual policies adopted by the EU and Ukraine towards each other. The EU has never adopted a clear strategy towards Ukraine and other western CIS states that seek EU membership, and in general has paid far too little attention to the region. Ukraine straddles the Central and East European-Eurasian divide. This makes it all the more imperative that the EU devise a strategy that would support a potential shift within Ukraine towards a more Central and East European identity. This potential is more present in Ukraine than in other CIS states. The most effective manner to support Ukraine’s ‘European choice’ may be by offering it an ‘open-door’ policy. The 2004 elections will have a decisive impact upon Ukraine’s ‘European choice’. If the front-runner in polls since 2000, Viktor Yushchenko, won the elections, the EU would be forced to change its ‘closed-door’ approach. Yushchenko would no longer continue a virtual ‘European choice’ strategy and the EU would be forced to drop its own virtual policy towards Ukraine. The policy proposals developed in this Occasional Paper outline a possible EU strategy towards Ukraine.