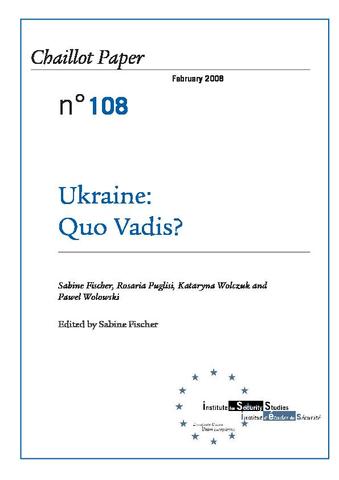 Where is Ukraine going? One of the largest and most populous states on the continent of Europe, ‘sandwiched’ between Russia and the EU, Ukraine is located in the centre of a European sub-region which has been characterised by great instability since the breakdown of the Soviet Union. As this Chaillot Paper endeavours to show, Ukraine itself has great potential to either stabilise or destabilise the region. Therefore, the question of Ukraine’s future orientation is of crucial importance for European security in general. The aftermath of the parliamentary elections on 30 September 2007 and the renewal of a coalition between the ‘Orange Forces’ in December seems to be an opportune time to reflect on this question. After a long period characterised by ambivalent policies vacillating between Russia and the Western community of states, a democratic upheaval swept away the corrupt regime of President Kuchma, and Ukraine embarked on a course towards Euro-Atlantic integration after the 2004 Orange Revolution. However, the post-revolutionary transformation did not go smoothly, with the new political leadership quickly becoming bogged down in domestic infighting. Internal crises and power struggles left the country practically without leadership between March and August 2006 and again between April and September/December 2007.