The Double Tragedy of Katyn 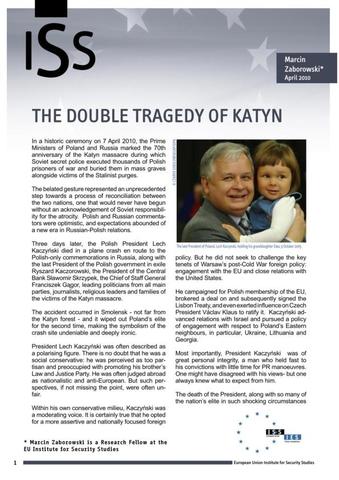 In a historic ceremony on 7 April 2010, the Prime Ministers of Poland and Russia marked the 70th anniversary of the Katyn massacre during which Soviet secret police executed thousands of Polish prisoners of war and buried them in mass graves alongside victims of the Stalinist purges.  The belated gesture represented an unprecedented step towards a process of reconciliation between the two nations, one that would never have begun without an acknowledgement of Soviet responsibility for the atrocity.  Polish and Russian commentators were optimistic, and expectations abounded of a new era in Russian-Polish relations.

The death of the President, along with so many of the nation’s elite in such shocking circumstances on foreign soil, will undoubtedly have implications for the fledgling rapprochement between Poland and Russia. Russia and its leaders have expressed their sympathy; Prime Minister Putin rushed to the crash site where he met the Polish Prime Minister Donald Tusk, and he and President Medvedev both delivered moving addresses on Polish television. In another goodwill gesture by the Russian government, the state-controlled Culture Channel screened for the second time this month Polish Director Andrzej Wajda’s latest work ‘Katyn’, a harrowing film that leaves no doubt about the Soviet role in the massacre and the ensuing cover-up. At a time of extraordinary grief, the Russians are mourning alongside the Poles.