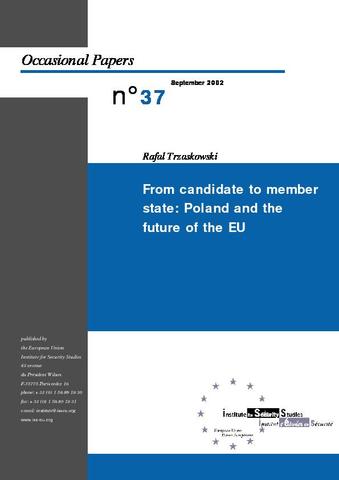 The official Polish position on the future of the European Union is characterised above all by:
Continuity – there are no major differences between the previous centre-right government and the current social democratic one when it comes to the future of Europe. Evolution – the official Polish position on the future of Europe is evolving. At the outset it was very vague, cautious and sometimes even defensive, but with time it has become more concrete,less cautious and more constructive. Following a period of ‘uninformed enthusiasm’ in the formulation of the official position,the Polish government is trying to anticipate the role that Poland may play as a future member,albeit a member of somewhat limited potential. There is no division between current and future members on the future of Europe, although there are differences when it comes to the approach to specific issues.The Polish official position, when it comes to its philosophy, does not differ very greatly from the positions taken by other candidate countries. However, it has been the most substantial of those taken by candidate countries, concerning both the number of interventions and their content. The majority of the Polish political class have not as yet fully grasped all the intricacies of the dynamics of European integration. Most politicians react more out of instinct than on the basis of an adequate understanding of the complicated reality. The official Polish position has undergone important spin-doctoring, and the unformed views of many of the authorities tend to be influenced by this. The Polish position takes into account external expectations. One can gain the impression that the Polish authorities are engaged in a massive marketing exercise aimed at creating the image of a constructive partner of decisively pro-European credentials. Outside governmental circles the debate on the future of Europe has not really begun. There is little awareness of the importance of the issues being discussed. There is virtually no internal debate within political parties, and this is the biggest weakness in the Polish position. The official view has been largely formulated by the technocratic élite, with very limited input or feedback from public opinion. Polish politicians tend to be more specific on concrete issues than on the question of the Union’s final shape, on which they studiously avoid any definite statements. In relation to Polish politicians and their institutional preferences, the neo-institutionalist claim that goals are often only discovered in the course of negotiations is proving more than justified. Polish politicians in general do not have ready answers to every single issue that is being discussed during the plenary sessions. Their personal convictions concern only the most fundamental issues, and they do not adhere too firmly to preconceived notions. They are therefore much more open to learning or socialisation processes. The Polish position on the EU’s role in the world, although formulated separately from that on the future of Europe, is characterised by the same features. Officially, Poland fully supports both a strengthening of the CFSP and the creation of an ESDP. However, its position on the issue remains ambivalent. Most importantly, Poland is not satisfied with the type of relationship that it has been offered within ESDP. The debate in Poland has not really addressed the question of the future role of the EU on the international scene. Moreover, it is doubtful that Poland could interfere with any of the Union’s ambitions in that particular field, especially if one considers its current track record. Whereas many of these observations – positions largely spin-doctored by the technocrats, limited debate, and lack of conviction and leadership among the political class – may also be true in relation to current member states, the difference is one of degree.