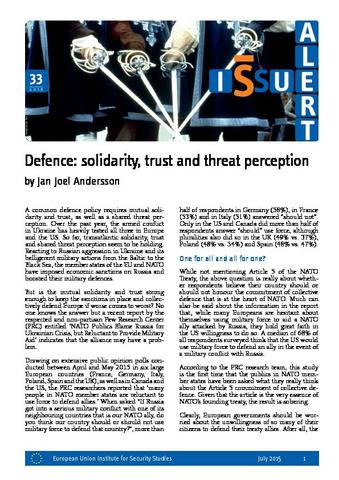 A common defence policy requires mutual solidarity and trust, as well as a shared threat perception. Over the past year, the armed conflict in Ukraine has heavily tested all three in Europe and the US. So far, transatlantic solidarity, trust and shared threat perception seem to be holding. Reacting to Russian aggression in Ukraine and its belligerent military actions from the Baltic to the Black Sea, the member states of the EU and NATO have imposed economic sanctions on Russia and boosted their military defences. But is the mutual solidarity and trust strong enough to keep the sanctions in place and collectively defend Europe if worse comes to worst? No one knows the answer but a recent report by the respected and non-partisan Pew Research Center (PRC) entitled ‘NATO Publics Blame Russia for Ukrainian Crisis, but Reluctant to Provide Military Aid’ indicates that the alliance may have a problem.

If not now, when? The Nordic EU Battlegroup