The Civilian CSDP Compact – A success story for the EU’s crisis management Cinderella? 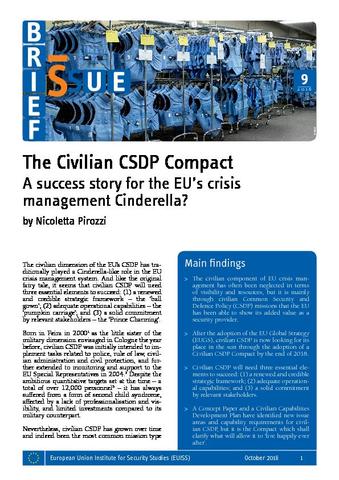 The civilian dimension of the EU’s CSDP has traditionally played a Cinderella-like role in the EU crisis management system. And like the original fairy tale, it seems that civilian CSDP will need three essential elements to succeed: (1) a renewed and credible strategic framework – the ‘ball gown’; (2) adequate operational capabilities – the ‘pumpkin carriage’; and (3) a solid commitment by relevant stakeholders – the ‘Prince Charming’.

Born in Feira in 2000 as the little sister of the military dimension envisaged in Cologne the year before, civilian CSDP was initially intended to implement tasks related to police, rule of law, civilian administration and civil protection, and further extended to monitoring and support to the EU Special Representatives in 2004. Despite the ambitious quantitative targets set at the time – a total of over 12,000 personnel – it has always suffered from a form of second child syndrome, affected by a lack of professionalisation and visibility, and limited investments compared to its military counterpart. Nevertheless, civilian CSDP has grown over time and indeed been the most common mission type since the launch of operational CSDP in 2003: 22 civilian missions have been deployed (out of 34) to areas ranging from the Western Balkans to sub-Saharan Africa, from the Middle East to southern Caucasus, and ten (out of 16) are still ongoing.