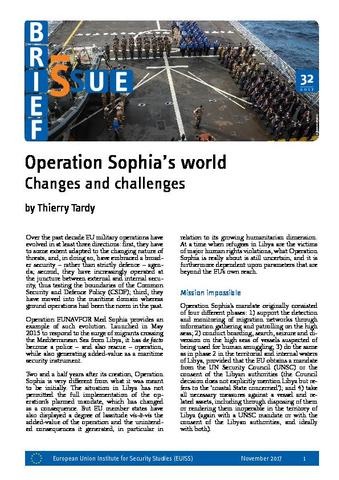 Over the past decade EU military operations have evolved in at least three directions: first, they have to some extent adapted to the changing nature of threats, and in doing so they have embraced a broader security – rather than strictly defence – agenda; second, they have increasingly operated at the juncture between external and internal security, thus testing the boundaries of the Common Security and Defence Policy (CSDP); third, they have moved into the maritime domain whereas ground operations had in the past been the norm.

Operation EUNAVFOR Med Sophia provides an example of such evolution. Launched in May 2015 to respond to the surge of migrants crossing the Mediterranean Sea from Libya, it has de facto become a police – and also rescue – operation, while also generating added-value as a maritime security instrument.

Out of (and inside) Africa: migration routes and their impacts

European Security and Defence – The basics