Behind and beyond al-Sisi’s bid 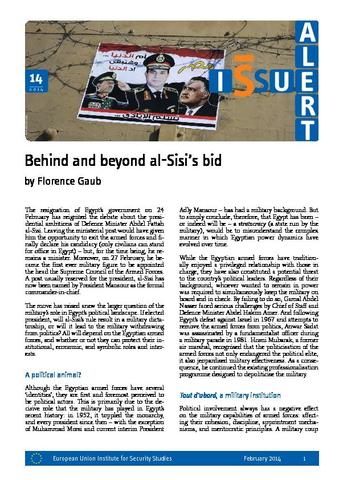 The resignation of Egypt’s government on 24 February has reignited the debate about the presidential ambitions of Defence Minister Abdel Fattah al-Sisi. His removal from the post would have given him the opportunity to leave the armed forces and finally declare his candidacy (only civilians can stand for office in Egypt) – but, for the time being, he will remain a minister.

Most importantly, the move has raised anew the larger question of the military’s role in Egypt’s political landscape. If elected president, will al-Sisi’s rule result in a military dictatorship, or will it lead to the military withdrawing from politics? All will depend on the Egyptian armed forces, and whether or not they can protect their institutional, economic, and symbolic roles and interests.