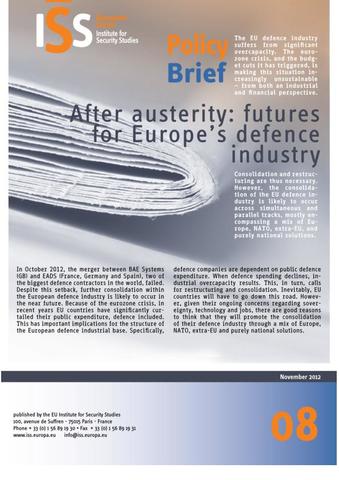 In October 2012, the merger between BAE Systems (GB) and EADS (France, Germany and Spain), two of the biggest defence contractors in the world, failed. Despite this setback, further consolidation within the European defence industry is likely to occur in the near future. Because of the eurozone crisis, in recent years EU countries have significantly curtailed their public expenditure, defence included. This has important implications for the structure of the European defence industrial base. Specifically, defence companies are dependent on public defence expenditure.

When defence spending declines, industrial overcapacity results. This, in turn, calls for restructuring and consolidation. Inevitably, EU countries will have to go down this road. However, given their ongoing concerns regarding sovereignty, technology and jobs, there are good reasons to think that they will promote the consolidation of their defence industry through a mix of Europe, NATO, extra-EU and purely national solutions.