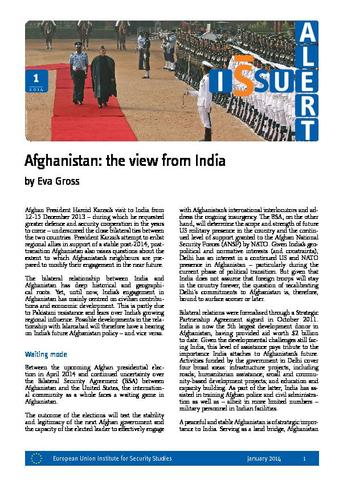 Afghan President Hamid Karzai’s visit to India from 12-15 December 2013 – during which he requested greater defence and security cooperation in the years to come – underscored the close bilateral ties between the two countries. President Karzai’s attempt to enlist regional allies in support of a stable post-2014, post-transition Afghanistan also raises questions about the extent to which Afghanistan’s neighbours are prepared to modify their engagement in the near future.

The bilateral relationship between India and Afghanistan has deep historical and geographical roots. Yet, to date, India’s engagement in Afghanistan has mainly centred on civilian contributions and economic development. This is partly due to Pakistani resistance and fears over India’s growing regional influence. Possible developments in the relationship with Islamabad will therefore have a bearing on India´s future Afghanistan policy – and vice versa.