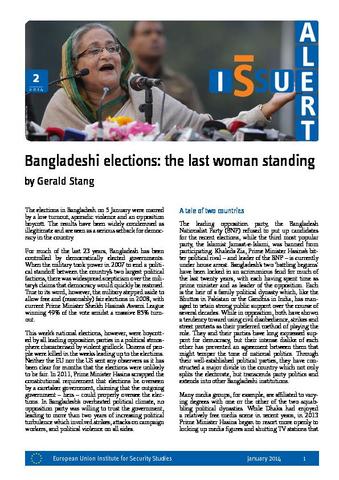 The election in Bangladesh on 5 January was marred by a low turnout, sporadic violence and an opposition boycott. The results have been widely condemned as illegitimate and are seen as a serious setback for democracy in the country. This week’s national election was boycotted by all leading opposition parties in a political atmosphere characterised by violent gridlock. Dozens of people were killed in the weeks leading up to the election. Neither the EU nor the US sent any observers as it has been clear for months that the election was unlikely to be fair. In 2011, Prime Minister Hasina scrapped the constitutional requirement that elections be overseen by a caretaker government, claiming that the outgoing government – hers – could properly oversee the elections. In Bangladesh’s overheated political climate, no opposition party was willing to trust the government, leading to more than two years of increasing political turbulence which involved strikes, attacks on campaign workers, and political violence on all sides.