Zika: a crisis that bites 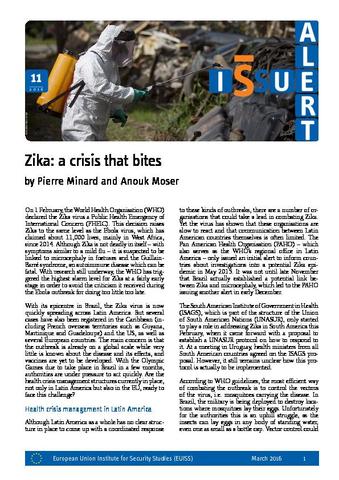 On 1 February, the World Health Organisation (WHO) declared the Zika virus a Public Health Emergency of International Concern (PHEIC). This decision raises Zika to the same level as the Ebola virus, which has claimed about 11,000 lives, mainly in West Africa, since 2014. Although Zika is not deadly in itself – with symptoms similar to a mild flu – it is suspected to be linked to microcephaly in foetuses and the Guillain-Barré syndrome, an autoimmune disease which can be fatal. With research still underway, the WHO has triggered the highest alarm level for Zika at a fairly early stage in order to avoid the criticism it received during the Ebola outbreak for doing too little too late. With its epicentre in Brazil, the Zika virus is now quickly spreading across Latin America. But several cases have also been registered in the Caribbean (including French overseas territories such as Guyana, Martinique and Guadeloupe) and the US, as well as several European countries. The main concern is that the outbreak is already on a global scale while very little is known about the disease and its effects, and vaccines are yet to be developed. With the Olympic Games due to take place in Brazil in a few months, authorities are under pressure to act quickly. Are the health crisis management structures currently in place, not only in Latin America but also in the EU, ready to face this challenge?