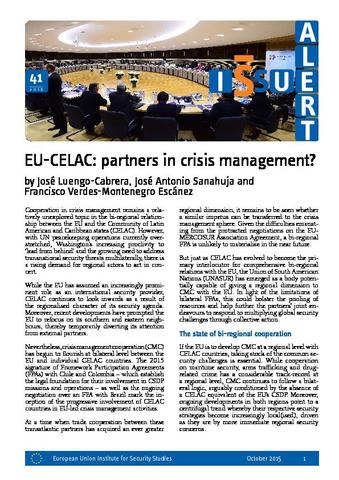 Cooperation in crisis management remains a relatively unexplored topic in the bi-regional relationship between the EU and the Community of Latin American and Caribbean states (CELAC). However, with UN peacekeeping operations currently overstretched, Washington’s increasing proclivity to ‘lead from behind’ and the growing need to address transnational security threats multilaterally, there is a rising demand for regional actors to act in concert. While the EU has assumed an increasingly prominent role as an international security provider, CELAC continues to look inwards as a result of the regionalised character of its security agenda.

Moreover, recent developments have prompted the EU to refocus on it southern and eastern neighbours, thereby temporarily diverting its attention from external partners. Nevertheless, crisis management cooperation (CMC) has begun to flourish at bilateral level between the EU and individual CELAC countries.

EU-LAC: the other transatlantic partnership