The year of Europe? 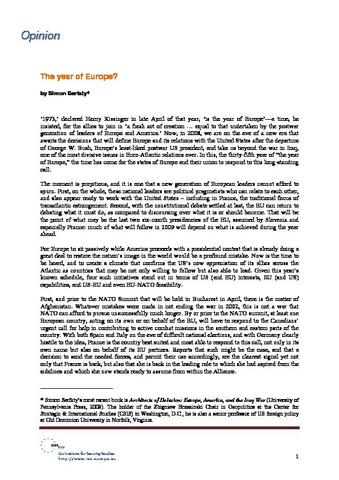 ‘1973,’ declared Henry Kissinger in late April of that year, ‘is the year of Europe’—a time, he insisted, for the allies to join in ‘a fresh act of creation … equal to that undertaken by the postwar generation of leaders of Europe and America.’ Now, in 2008, we are on the eve of a new era that awaits the decisions that will define Europe and its relations with the United States after the departure of George W. Bush, Europe’s least-liked postwar US president, and take us beyond the war in Iraq, one of the most divisive issues in Euro-Atlantic relations ever. In this, the thirty-fifth year of “the year of Europe,” the time has come for the states of Europe and their union to respond to this long-standing call.

The moment is propitious, and it is one that a new generation of European leaders cannot afford to spurn. First, on the whole, these national leaders are political pragmatists who can relate to each other, and also appear ready to work with the United States – including in France, the traditional focus of transatlantic estrangement. Second, with the constitutional debate settled at last, the EU can return to debating what it must do, as compared to discoursing over what it is or should become. That will be the point of what may be the last two six-month presidencies of the EU, assumed by Slovenia and especially France: much of what will follow in 2009 will depend on what is achieved during the year ahead.

For Europe to sit passively while America proceeds with a presidential contest that is already doing a great deal to restore the nation’s image in the world would be a profound mistake. Now is the time to be heard, and to create a climate that confirms the US’s new appreciation of its allies across the Atlantic as countries that may be not only willing to follow but also able to lead. Given this year’s known schedule, four such initiatives stand out in terms of US (and EU) interests, EU (and US) capabilities, and US-EU and even EU-NATO feasibility.