The worrying trend: Europeans and Israel 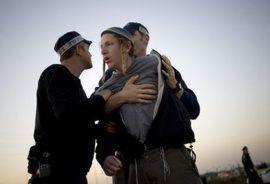 In December, after Israeli settlers raided the Ephraim Brigade Base in the Hebron hills slightly injuring one soldier, former Israeli Defence Minister Benyamin Ben-Eliezer made it clear that he advocates shooting at anyone who puts the life of a soldier in danger, whether Arab or Jew. A few days after, shortly after the evacuation of the Mitzpe Avichai illegal settler outpost, a company commander of a Golani base in Hebron told his soldiers to be prepared for possible settler reprisals. However, addressing the issue of using force, he said: ‘In any case, no matter what happens, let the world burn down for all I care, nobody opens fire at Jews! We don't want a civil war.’

Ever since I can remember Israeli pundits have been fond of proclaiming that Israel is now worse than it has ever been, and ‘Israel has never been this close to a civil war since Altalena’. This time, the Israeli doomsday prophets are worse than ever. Not only is there a rift between the left and the right, or the ‘land-for-peace’ and the ‘peace-for-peace people,’ or even between secular and religious; now there is even a growing gap between different religious groups within Israel.  While the settlers are beginning to use violence against the IDF, Israeli seculars are also witnessing a fight between the ultra-Orthodox and the national-religious, with the national-religious defending secular society.

While those on the Israeli political right are fond of proclaiming that Israeli society is as strong as ever, the rising chorus against threats to democratic values, religious freedom and the equality of women is almost deafening on the political left. So how does this affect the world’s understanding of Israel?  The world, not attuned to Israeli bickering, wants things in black and white, and is much happier with easy dichotomies, such as occupation/no occupation; black hats/no black hats; settlement/no settlement. For the Americans, the ‘new’ complexity that is coming out of Israel has become a bit of a fly in the ointment for those who have noticed at all, although most politicians obviously choose to look the other way; it is after all an election year. For Europeans however, from where I am watching developments, the feeling seems to be one of bewilderment bordering on smugness. It is almost as if the Europeans are saying ‘told you so ... didn't we say all along that Israel is an immoral society?’

But there is something that Europeans do not understand. Israeli Jews are not supposed to fight each other. At least not when they have a common enemy. In fact, wars ‘against brothers’ are the only wars that are outlawed in the Torah, a fact that is ingrained deep in the Jewish culture and consciousness, is it not? On the one hand, this fact may explain why many Israelis instinctively feel devastated when watching the IDF having to turn against Jewish settlers to evacuate illegal West Bank outposts. On the other hand, it fails to explain how those settlers can turn against the IDF in the first place, especially as they are deeply religious. How is it possible?

The answer, which is deeply worrying, does not have to do with a difference in the interpretation of violence or war, but rather with a difference in the interpretation of who is a ‘brother.’ Apparently, for some Jewish groups, as long as you are not my ‘brother,’ violence is justified. There is a sliding scale of definitions of ‘brother’ among various groups within Israel, from those who see all fellow humans as ‘brothers,’ to those who only view a narrowing group of religious Jews as a proper ‘brother.’ What is perhaps ironic, is that this latter, narrowing definition, which is used to permit or overlook violence within the national-religious settler community against both Palestinians and the IDF, is also used against the national-religious themselves by the ultra-Orthodox community, who considers them insufficiently religious (or too immodest) to live in their neighbourhoods. When in doubt — when lifestyles and opinions clash — they simply cannot be Jews.

For Europeans, this discussion is utterly incomprehensible. Although Europe itself still suffers from deep-seated racism and anti-Semitism, its contemporary inability to tolerate ‘others’ comes more from a fear of the unknown than from religious or moral principles or interpretations. The idea that the distinction between who is a Jew and who is not determines what protections or measures can be taken against such a person obviously also goes against international norms and humanitarian law. Both of these frameworks drew early inspiration from Jewish Biblical and Rabbinic sources discussing the well-known imperative to protect all human life above all else.

The European reaction to Israeli radicalism therefore runs the risk of becoming deeply personal. While US evangelicalism provides blanket approval for anything that contains the phrases ‘Jewish’ and ‘Land of Israel’ (after all these Christians believe that they have become part of the same covenant and that Jews need to be there for the second coming to occur), Europeans have a hard time understanding how the Gentile/Jew distinction is not going to turn into the same intolerant society that we see in other parts of the Middle East. After all, and as Middle Eastern Jews know well, in the history of religious minorities of the Middle East, the Muslim treatment of Jews and Christians as second-class citizens over which certain protections and guarantees simply did not apply was directly derived from Islamic laws and Koranic sources. A European reaction to recent Israeli developments could therefore come, not because Europeans have ‘bleeding hearts’ for the Palestinian cause, but rather because some of the narrowing interpretations and fundamentalist doctrines that are coming out of the Israeli public debate clearly categorise all non-Jews, including the Europeans themselves, as subordinate human beings.

Tova Norlén is currently a TAPIR fellow at the EUISS.

The opinions expressed in this article are her own and do not necessarily reflect those of the Institute.

Why is the EU ‘irrelevant’ for Israel?