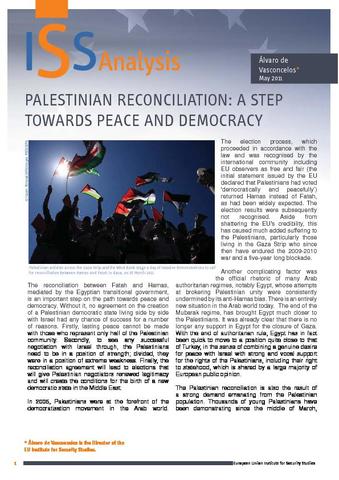 The reconciliation between Fatah and Hamas, mediated by the Egyptian transitional government, is an important step on the path towards peace and democracy. Without it, no agreement on the creation of a Palestinian democratic state living side by side with Israel had any chance of success for a number of reasons. Firstly, lasting peace cannot be made with those who represent only half of the Palestinian community. Secondly, to see any successful negotiation with Israel through, the Palestinians need to be in a position of strength; divided, they were in a position of extreme weakness. Finally, the reconciliation agreement will lead to elections that will give Palestinian negotiators renewed legitimacy and will create the conditions for the birth of a new democratic state in the Middle East.
In 2006, Palestinians were at the forefront of the democratisation movement in the Arab world. The election process, which proceeded in accordance with the law and was recognised by the international community including EU observers as free and fair (the initial statement issued by the EU declared that Palestinians had voted ‘democratically and peacefully’) returned Hamas instead of Fatah, as had been widely expected. The election results were subsequently not recognised. Aside from shattering the EU’s credibility, this has caused much added suffering to the Palestinians, particularly those living in the Gaza Strip who since then have endured the 2009-2010 war and a five-year long blockade.

Transforming the Quartet principles: Hamas and the Peace Process

The challenge of Middle East peace and regional security: should we change the strategy?

The EU and the Middle East peace process: between pessimism and optimism