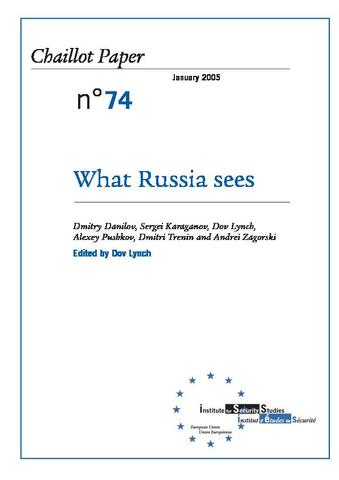 The Cold War is finally ending in Europe and the shape of a new order is becoming visible. Europe’s institutional structure is different from the bipolar era or even the transition years of the 1990s. The North Atlantic Treaty Organisation is assuming a more global profile and less direct responsibility in Europe itself. The Organisation for Security and Cooperation in Europe has entered a crisis, in which major participating states are challenging its utility. Meanwhile, the European Union is emerging as the Continent’s primary security provider. With enlargement in 2004, a new Europe has been born, founded around the ambitions and values of the EU. So much is clear. What is less clear is the place of Russia in the emerging order. What is the role of Russia in the new Europe? How does Russia view such developments? What policies will Russia adopt in Europe and the new ‘shared neighbourhood’? As the EU has moved closer to Russia geographically, real differences have arisen in EU-Russia relations, featuring as much misperception of the other’s policies as divergent interests. These circumstances are the justification for this Chaillot Paper. Given the strategic importance of Russia for the EU and Europe, it is vitally important that EU member states understand better Russian views and interests. ‘What Russia sees’ is one step to help clear the landscape of relations, in order dispel myths that are false and highlight differences that are real. The authors of this paper are Russia’s foremost experts, and they have different backgrounds, professional experiences and political views.