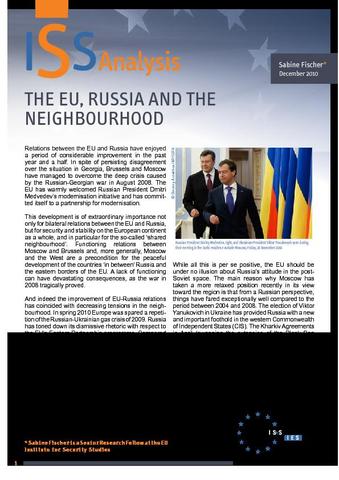 Relations between the EU and Russia have enjoyed a period of considerable improvement in the past year and a half. In spite of persisting disagreement over the situation in Georgia, Brussels and Moscow have managed to overcome the deep crisis caused by the Russian-Georgian war in August 2008. This development is of extraordinary importance not only for bilateral relations between the EU and Russia, but for security and stability on the European continent as a whole, and in particular for the so-called ‘shared neighbourhood’.&nbsp;
While all this is per se positive, the EU should be under no illusion about Russia’s attitude in the post-Soviet space. The main reason why Moscow has taken a more relaxed position recently in its view toward the region is that from a Russian perspective, things have fared exceptionally well compared to the period between 2004 and 2008. Russia’s interest in the partnership for modernisation provides the EU with leverage to shape the agenda in this direction. EU policy should aim to strengthen the causal link between the ‘reset’ of relations with Russia and positive developments in the neighbourhood. This depends to a great extent on Russia’s readiness to reciprocate.