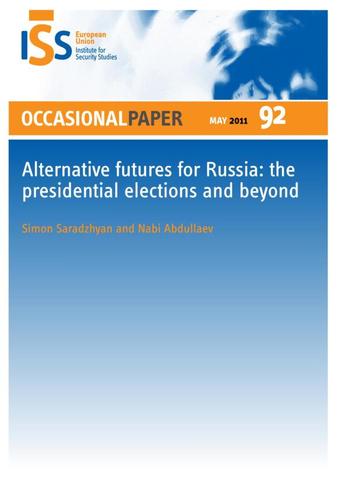 In the spring of 2012 Russians will go to polling stations to elect the country’s president for the 2012-2018 term. In actual fact, voters will formalise the choice that the top tier of Russia’s ruling elite will have made by the end of 2011, unless destabilising events disrupt the established procedures for holding presidential elections in Moscow.

Both Prime Minister Vladimir Putin and President Dmitry Medvedev have repeatedly suggested that they may run in the 2012 presidential election, but neither of them has announced an official bid so far and they have put considerable effort into keeping everyone guessing. When questioned, Putin and Medvedev say only that they will consult with each other in order to decide who will seek the presidency. There is little doubt that the outcome of these private consultations will determine who will be Russia’s president in 2012-2018, given the popularity of both these potential candidates and the questionable fairness of Russia’s recent elections.

This Occasional Paper argues that Putin – Russia’s most powerful and popular politician – and his supporters in the political and business elites of the country will determine who will become the next president. Once this choice is made sometime this year, the vast majority of Russia’s ruling elite will close ranks and support the chosen candidate.

Unless a major crisis, whether naturally occurring or orchestrated, intervenes, however, it would not be easy for Putin to convince the Russian population that the country needs him to return to the Kremlin for another term, after having stepped down in 2008 to give way to his designated successor Medvedev.

If there is a deep crisis in 2011 that the ruling tandem cannot manage without risking their own political and business interests, they may have to back a third candidate.

Even without a serious crisis, however, Prime Minister Putin’s loss of confidence in President Medvedev’s ability to respect the interests of his political mentor coupled with Putin’s own fatigue could prompt him to back a third candidate. As noted above, there is also a possibility that disruptive events on the scale of the current revolutions in the Arab world could erupt, leading to a change of power that neither Putin nor Medvedev would support. However, we assume that the probability of such a development is low for a number of reasons, as explained in this Occasional Paper.

Based on the analysis of structural factors favouring continuity and factors of uncertainty that could potentially trigger change, this paper presents alternative scenarios for the period leading up to the Russian presidential elections and beyond: (i) Medvedev stays in power; (ii) Putin returns to power; (iii) President X. These scenarios would have markedly different implications for domestic politics in Russia. As argued in the conclusion, however, a certain continuity across scenarios can be assumed for Moscow’s foreign policy.