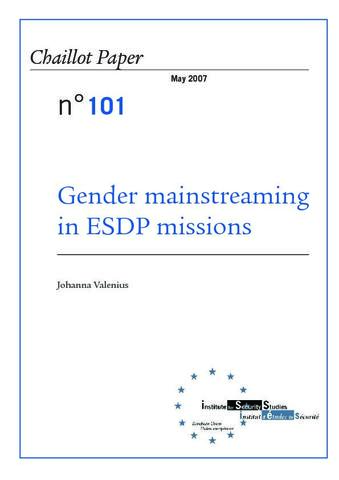 In 2000 the United Nations Security Council passed Resolution 1325, Women, Peace and Security, which calls for ‘gender mainstreaming’. This means taking account of gender factors in the planning and implementation of crisis management policies and missions, and gender balancing in civilian and military operations. International organisations, governments and national militaries have become increasingly aware of the unintended gendered side-effects of peacekeeping operations, including incidents of prostitution, trafficking in women and the exploitation of local women and men in post-conflict societies. Systematic sexualised violence against women during conflicts, and the effects of this on post-war reconstruction, further highlights the need for gender-sensitive policies. Within the EU, gender mainstreaming in crisis management operations became topical in 2005 when the European Council welcomed a paper by the General Secretariat on Implementation of UNSCR 1325 in the context of ESDP. This Chaillot Paper seeks to clarify and explore the issue of gender mainstreaming. In the first part it addresses what gender mainstreaming is and why it should be implemented in ESDP missions. The second part presents the findings of a case study conducted by researchers at the EU Institute for Security Studies on the ESDP missions in Bosnia-Herzegovina.