US elections: national security will be back in the spotlight in the 2008 Campaign 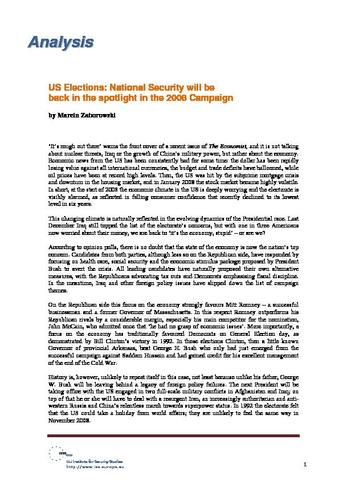 ‘It’s rough out there’ warns the front cover of a recent issue of The Economist, and it is not talking about nuclear threats, Iraq or the growth of China’s military power, but rather about the economy. Economic news from the US has been consistently bad for some time: the dollar has been rapidly losing value against all international currencies, the budget and trade deficits have ballooned, while oil prices have been at record high levels. Then, the US was hit by the subprime mortgage crisis and downturn in the housing market, and in January 2008 the stock market became highly volatile. In short, at the start of 2008 the economic climate in the US is deeply worrying and the electorate is visibly alarmed, as reflected in falling consumer confidence that recently declined to its lowest level in six years.
This changing climate is naturally reflected in the evolving dynamics of the Presidential race. Last December Iraq still topped the list of the electorate’s concerns, but with one in three Americans now worried about their money, we are back to ‘it’s the economy, stupid’ – or are we?
According to opinion polls, there is no doubt that the state of the economy is now the nation’s top concern. Candidates from both parties, although less so on the Republican side, have responded by focusing on health care, social security and the economic stimulus package proposed by President Bush to avert the crisis. All leading candidates have naturally proposed their own alternative measures, with the Republicans advocating tax cuts and Democrats emphasising fiscal discipline. In the meantime, Iraq and other foreign policy issues have slipped down the list of campaign themes.

African geopolitics in transformation: what future for peacebuilding? EUISS-led session at the 2020 Stockholm Forum on Peace and Development
Conferences
Africa