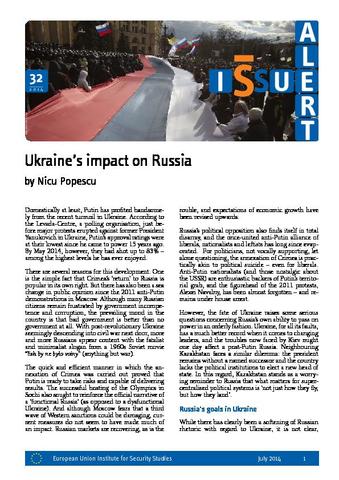 Domestically at least, Putin has profited handsomely from the recent turmoil in Ukraine. According to the Levada-Centre, a polling organisation, just before major protests erupted against former President Yanukovich in Ukraine, Putin’s approval ratings were at their lowest since he came to power 15 years ago. By May 2014, however, they had shot up to 83% – among the highest levels he has ever enjoyed. There are several reasons for this development. One is the simple fact that Crimea’s ‘return’ to Russia is popular in its own right. But there has also been a sea change in public opinion since the 2011 anti-Putin demonstrations in Moscow. Although many Russian citizens remain frustrated by government incompetence and corruption, the prevailing mood in Russia is that bad government is better than no government at all. With post-revolutionary Ukraine seemingly descending into civil war next door, more and more Russians appear content with the fatalist and minimalist slogan from a 1960s Soviet movie “lish by ne bylo voiny” (anything but war).