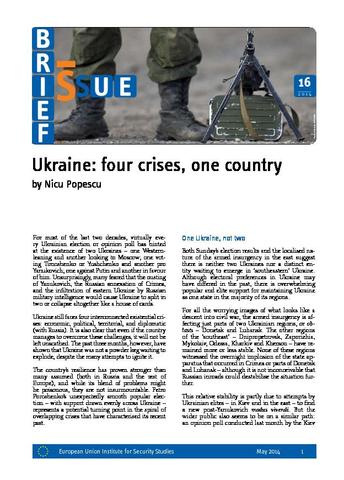 For most of the last two decades, virtually every Ukrainian election or opinion poll has revealed two Ukraines – one Western-leaning and another looking to Moscow; one voting Timoshenko or Yushchenko and another pro Yanukovich; one against Putin and another in favour of him. Unsurprisingly, many feared that the ousting of Yanukovich, the Russian annexation of Crimea, and the infiltration of eastern Ukraine by Russian military intelligence would cause Ukraine to split in two or collapse altogether like a house of cards. Ukraine still faces four interconnected existential crises: economic, political, territorial, and diplomatic (with Russia). It is also clear that even if the country manages to overcome these challenges, it will not be left unscathed. The past three months, however, have shown that Ukraine was not a powder keg waiting to explode, despite several matches having been thrown at it. The country’s resilience has proven stronger than many assumed (both in Russia and the rest of Europe), and while its blend of problems might be poisonous, they are not insurmountable. Petro Poroshenko’s unexpectedly smooth popular election – with support drawn evenly across Ukraine – represents a potential turning point in the spiral of overlapping crises that have characterised its recent past.