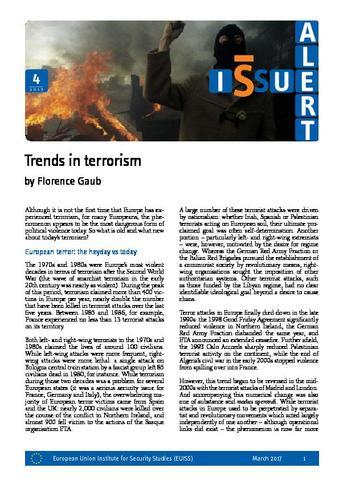 The 1970s and 1980s were Europe’s most violent decades in terms of terrorism after the Second World War (the wave of anarchist terrorism in the early 20th century was nearly as violent). During the peak years of this period, terrorism claimed more than 400 victims in Europe, nearly double the number that has been killed in terrorist attacks over the last five years. Between 1985 and 1986, for example, France experienced no less than 13 terrorist attacks on its territory.

Both left- and right-wing terrorists in the 1970s and 1980s claimed the lives of around 100 civilians. While left-wing attacks were more frequent, right-wing attacks were more lethal: a single attack on Bologna central train station by a fascist group left 85 civilians dead in 1980. While terrorism during those two decades was a problem for several European states (it was a serious security issue for France, Germany and Italy), the overwhelming majority of European terror victims came from Spain and the UK: nearly 2,000 civilians were killed over the course of the conflict in Northern Ireland, and almost 900 fell victim to the actions of the Basque organisation ETA.

Preventing terrorism in the south

Civil-military relations in the MENA: between fragility and resilience