Preventing terrorism in the south 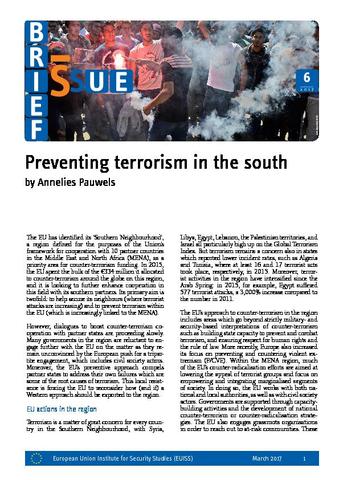 The EU has identified its ‘Southern Neighbourhood’, a region defined for the purposes of the Union’s framework for cooperation with 10 partner countries in the Middle East and North Africa (MENA), as a priority area for counter-terrorism funding. In 2015, the EU spent the bulk of the €334 million it allocated to counter-terrorism around the globe on this region, and it is looking to further enhance cooperation in this field with its southern partners. Its primary aim is twofold: to help secure its neighbours (where terrorist attacks are increasing) and to prevent terrorism within the EU (which is increasingly linked to the MENA).

However, dialogues to boost counter-terrorism cooperation with partner states are proceeding slowly. Many governments in the region are reluctant to engage further with the EU on the matter as they remain unconvinced by the European push for a tripartite engagement, which includes civil society actors. Moreover, the EU’s preventive approach compels partner states to address their own failures which are some of the root causes of terrorism.